Aviva Stadium in Dublin, Ireland, designed as a result of collaboration between global architects Populous and Dublin based architects, Scott Tallon Walker has been awarded a prize in the category of ‘The Architecture Award - Leisure & Hospitality’ at the International Property Awards 2010.

The form of the stadium developed as a response to the site conditions and expresses the several limitations that the site context placed on the project, while also providing optimal sight-lines for spectators and proximity to the pitch. The form allows for the highest tiers and hence the maximum number of spectators to be on the half way lines yet allows the building to sweep down to a single tier at the North end allowing daylight into the adjacent residential gardens and opening up the stadium bowl to the city.

The use of translucent and transparent polycarbonate for the external roofing and cladding allows for maximum light penetration through the building. The building skin reflects the light and the colours of the sky giving rise to a façade appearance that is constantly changing.
The curvilinear form reduces the visual mass and apparent height of the stadium in its residential neighbourhood by having no defined line between wall and roof. The transparent ‘shingled’ skin’s organic form wraps around the concourses, seating tiers and the pitch to enclose the atmospheric ‘cauldron’ of the seating bowl.
The organic form and the transparency of the external treatment dictated the approach to the internal planning and design. Accommodation is held back where possible from the external skin of the building to leave a continuous circulation around the perimeter of the floor plates. The main structural curved reinforced concrete ‘blades’ to the perimeter of the floor plates are expressed, and individually lit appearing as illuminated ‘ribs’ at night contrasting with the six cores rising through the building.
The International Property Awards in association with BLOOMBERG TELEVISION is open to residential and commercial property professionals from around the globe.
World Architecture News Artice 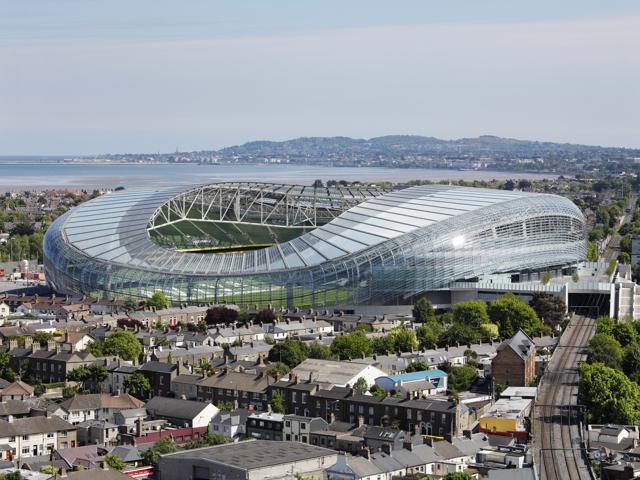